It doesn’t get any darker than this!!

There’s an odd relief in knowing it is only brighter from here.

Today is my annual “So Low that Down is Up” day…December 21, the day of the longest night. Tomorrow, December 22, is gonna be a wee bit brighter.

Today is my favourite day of the year…for symbolic and real reasons.

I heard that tomorrow, we will have 2 more seconds of light than today.

That’s progress.  Progress can start in a small way.

Tape. Lots of it.  In our house, I always made sure we had lots of tape. Little boys and tape just go together. Scotch tape, masking tape, and the tape of all tape: duct tape. My sons used gobs of tape growing up. I used to put duct tape in their stockings. They loved all things tape.

In a time of darkness, tape helped create a memory that I will never forget. Our family had gone from 4 to 3 at the end of April. That first summer was one of uncertainty as we all figured out how life would be without my former husband being a part of our everyday lives.

I was worn out and scared. We spent lots of time with friends and with each other—people need each other during dark times.

So, one day that summer my Junior Tribe Members spent hours making a fort in the basement.  It was awesome.  A fort palace with sleeping and living areas—the blankets were fastened together with–? You guessed—duct tape!

The boys asked for a picnic—actually an entire camp out in the fort.

But in a world where hard things had happened beyond their control, it seemed like this was something I could do for them. I agreed.

That night was magical and it will be forever engrained in my memory.

The fort was cozy with duct-tape-fastened-blankets close over our heads as we sat on the floor.  The furniture was close by, to form the walls. In a world that had become big and overwhelming, the fort was a cozy retreat that became a safe haven from the rest of this daunting life we lived.

The dark of the fort wasn’t ominous…actually, the close, dark feeling in that fort felt safe. We ate dinner by flashlight…the little bit of light helped us see our carrot sticks and pizza. The pizza was from a frozen box…but it tasted like gourmet in our little haven.

We could see each other under there, for sure, but the dimness of the space was part of what made it feel special.

After supper in that fort we watched Because of Winn-Dixie, a cute little movie in the fort. It was chosen fairly quickly and randomly without really knowing what it was about. The movie had different details but felt like it paralleled our own story…a child living with the loss of one parent while the other parent tries hard but good intentions also regularly messes up. In what seemed like a message from God, the tagline of the movie was something that stuck with me:

My JTM’s will still recall how much I wept during this little children’s flick.  They remember the evening now as an occasion to tease me over my tears…but warmly, somehow. Even all this time later, they too remember the flashlight-lit night under the blankets in the fort, where we shut out the rest of the world and were safely together in a little world held together by duct tape.

We fell asleep in sleeping bags in the fort, knowing we were together and we were ok.

I didn’t make them take it down the next day.  As a matter of fact, our first night in the fort was so memorable, we spent the next night there too. The cozy darkness broken only by the dim glow of the flashlight was something that just required an encore.

The nights in the fort reminded me that life could be good again.  That it was already good—and that felt like a miracle had found me.

The little fort reminded me that darkness didn’t have to be something to be frightened of or avoided…when, even just a flashlight creates a soft light in the darkness, it becomes a place of soft giggles and gentle conversation, a cozy haven…a place of healing.

Think of times in your own life when you’ve chosen darkness with only soft light because the dim light was actually something you wanted. Maybe it was a romantic dinner by candlelight, maybe it was a walk on a late summer evening at a camp with your cabin mates under a star lit sky, or sitting by a campfire on a lazy summer evening after dark, singing songs and roasting marshmallows. 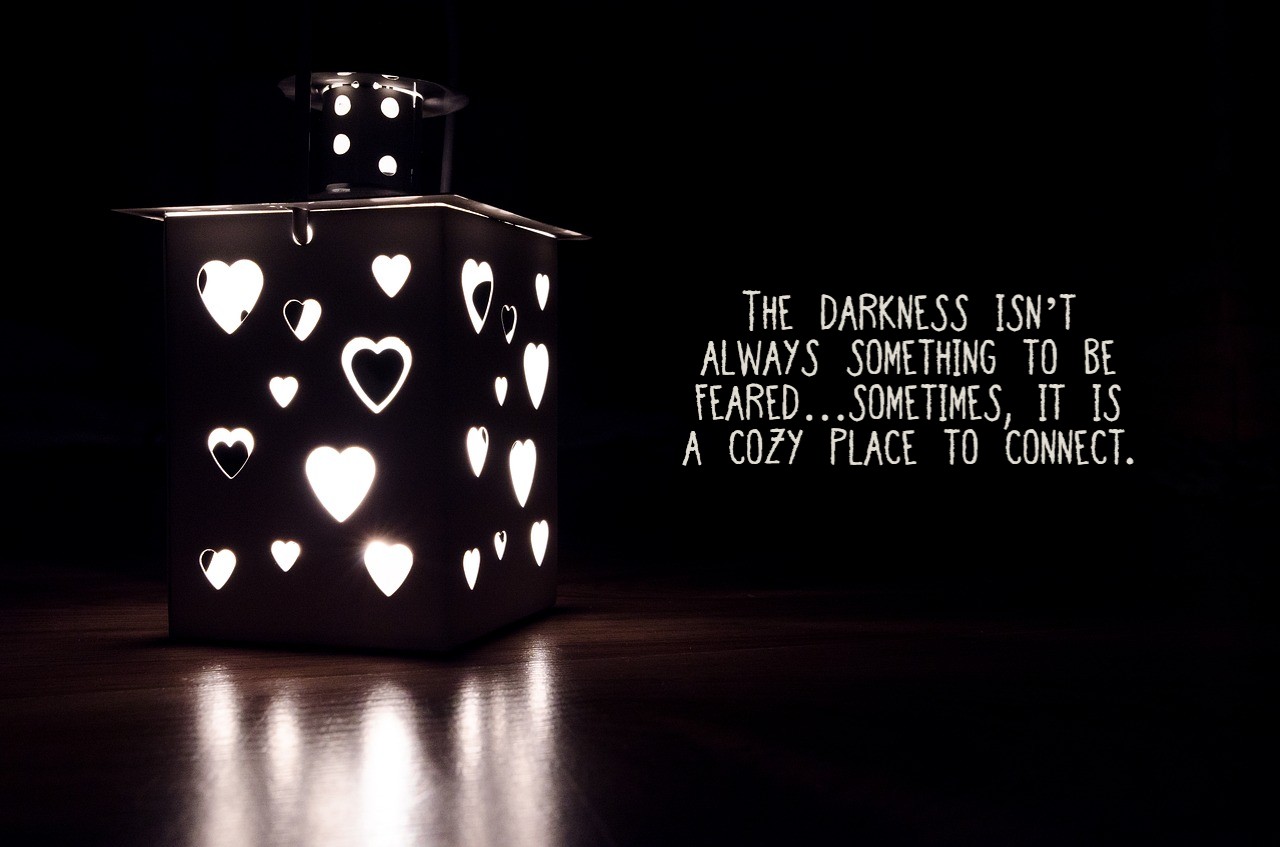 The darkness isn’t always something to be feared…sometimes, it is a cozy place to connect. It’s the little bit of light that makes it feel like a place to be brave. When there’s only a bit of light, secrets are told, vulnerabilities are shared in a way that creates more closeness.

The darkness creates a safe place to feel one’s feelings, share them with another and expose the tender parts of our soul.

Darkness isn’t so dark when someone else is there.

Just to sit quietly, or maybe speak in hushed whispers about tender things, or maybe about really nothing important at all…just a quiet, intimate babble of two people keeping each other company in the darkness.

The darkness can become sacred. A hallowed space made special because it is there that secrets are shared and unburdened, things that couldn’t be said in the light of day are quietly sighed out into existence

Sometimes, when someone is there, they themselves become a light the darkness.

By the very nature of my work, I sit with people in their darkness. People often come to see a therapist because the pain they are in has become to muddled and dark to go it alone.

A parting line that I often say when a client leaves at the end of a first session is: “It doesn’t have to stay this way.”

The client and I will talk further, and co-create a new ending. Because we work together, I don’t know what will happen–exactly–but I do know that it won’t stay this way.

It will get brighter.

And that’s what December 21st is for me…the incontrovertible evidence that I need to know that:

It will get brighter!

Tomorrow there will be more light. 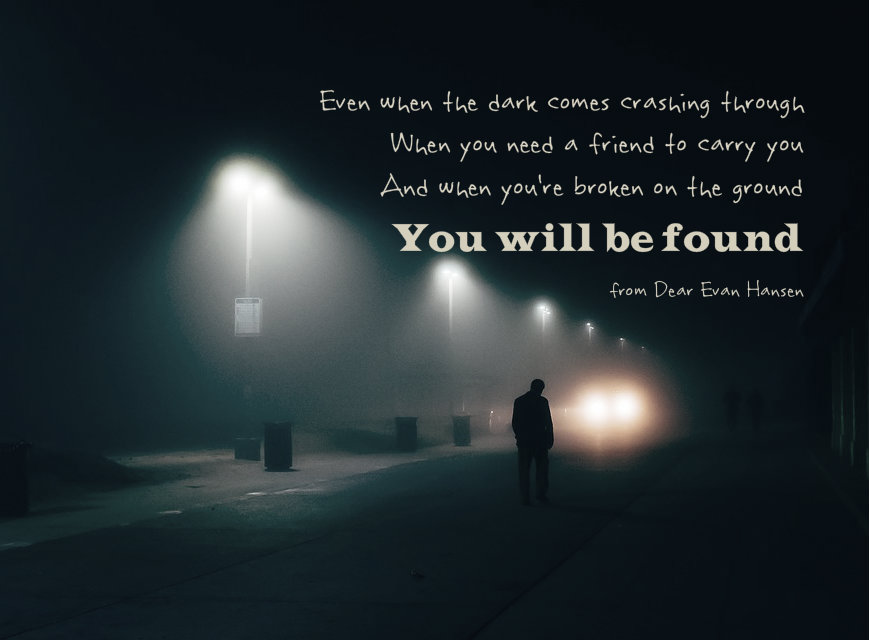 Darkness can shift from ominous to holy–with a presence.

You can be found in the darkness by someone–if you’ll invite someone into your dark, duct-taped, fragile, hallowed space.

You will be found:

This video gets my eyes leakin’ like a slow dripping faucet every time. I love the song…and I love this arrangement which makes clear the idea of all these people wanting the viewer to know: You will be found.

So many people banding together saying: “Let me come in. Let someone come in.”

It will get brighter. You will be found.

Today is a day to remember that it won’t always be like this.