I often hear someone refusing to come to counselling because they don’t have the problem:

Therapists don’t see it that way.

Us therapists know that blaming one person or one factor oversimplifies the issues. It doesn’t work. It’s not fair.

Therapists understand that an action or behaviour rarely arises in isolation.  Most things that happen within a family are a reaction to multiple complex factors.

Frequently, in therapy, as we dig down to understand the multiple cause and effect relationships, we look to address one factor which then affects another. 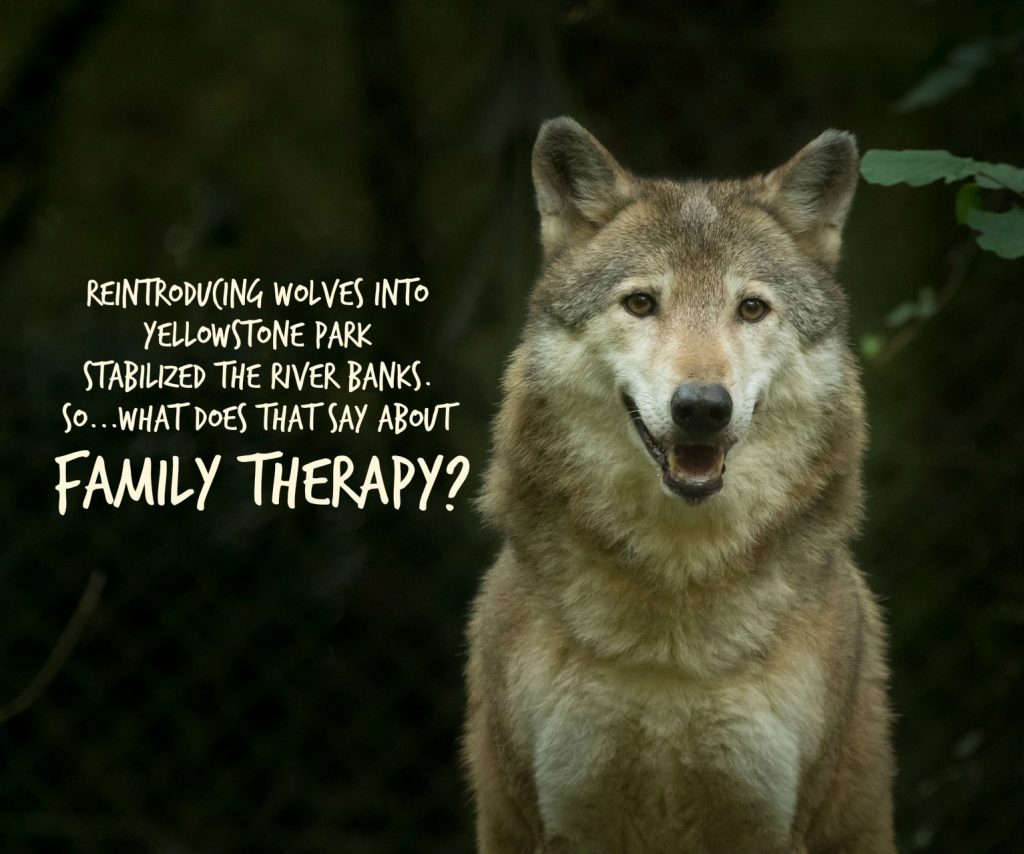 Nature teaches us a lot about how changing one factor impacts an entire system.

Take a quick peek at what happened when wolves were reintroduced to Yellowstone Park:

Isn’t it remarkable how the reintroduction of wolves into the park stabilized the banks of the river? How birds and reptiles appeared because wolves came onto the scene?

Would anyone have thought to say, “Gee, we want there to be more pooling of the water in Yellowstone. Why don’t we re-introduce wolves into the park to make that happen?”

This is how a system works:

It is remarkable how our work in the counselling room has ripple effects on people who encounter our clients.

As they work towards greater wholeheartedness in their own lives, they begin to impact the lives of others. As people relate to themselves differently, they make different choices as they relate to others…and others find space to relate differently, too!

A lot of our clients don’t tell a lot of people they are going for counselling…but people notice that they:

And that changes how the people around them react and interact.

So…you may be surprised at the ways people in your life who may never know that you have done your own personal work will be impacted by the changes in who you are.

The wolves changed the rivers at Yellowstone Park.

Often, people feel stuck as the people in their lives drink too much, work too much, pull away.  They panic when they see the lives of their children swirling around the toilet bowl…and they feel helpless.

In times of watching someone in your life struggle and feel helpless, a person often forgets that they themselves somehow participate in the system. Changing your role in the system may not “fix the problem”, but often things can’t stay the same when one person changes the system by being different in it. Not easy…often terrifying.

But worth considering…what might happen to the other players in your system if you change your role?