There was about a year in my life when I was in very close contact with a trauma survivor. Despite the fact that I had known him a long time, it seemed he didn’t trust me.

I would ask him, “How was your day?” as part of friendly conversation, he would suggest that I was digging for information.

When I would express caring, he would imply that I was manipulative.

When I would express confusion, and ask for understanding, he was vague and evasive.

When I would offer help, he pushed me away.

My best efforts to support and help were rebuffed.

After a time, I found myself talking to myself: “I don’t think I’m a monster. Am I a monster? I’m sure I’m not a monster.” But it was like I was trying to convince myself…because I wasn’t so sure.

I found myself replaying my actions and my underlying motives, trying to figure out why all my best efforts, that others seemed to appreciate and value, were met with suspicion and wariness. What was I doing wrong? Why was he acting towards me like that?

It was a very hard time in my life.

Our house is on a pie shaped lot…and is in a part of town that has old growth trees…It’s beautiful.  And very, very alive.

Our yard has squirrels and rabbits and birds…I love the action in our yard.

For my birthday this year, the Junior Tribe Members got together and gave me a bird feeder.  Husband bought an enormous bag of sunflower seeds and another bag of other seed.

It took a couple of weeks for them to find it, but the birds have been munching at this bird feeder for much of the day every day. I refill it every day.

I feel a ridiculous amount of pleasure watching the birds at the bird feeder.

I watch them often as I’m working on my computer, or in the kitchen, or sitting at the table.

They swoop in, grab a bite, and swoop off. Mostly little ones, but there are a couple of giant blue jays that stop by to visit. Sometimes, they hang around for a bit.

The other day, Husband texted me to tell me there were 13 birds at and around the bird feeder.  Thirteen!

That’s when I’m sitting in my living room, about 10 feet away from the window.

You’ll notice that the video only has one or two birds at a time.

The birds love the bird feeder.  It seems they are even willing to share it with the squirrels.  But as soon as we open the door, they scatter away.

And even when we go inside, they can take several minutes for any of them to return.

Today, I sat nearby the bird feeder very still for a very long time. I could see them up in the trees and on the garage.  I was waiting for them to not notice me and they were waiting for me to leave.

They waited me out…

When no bird would approach the feeder, I gave up and went inside. Almost immediately, there were a total of 15-17 birds moving in and around the feeder.

The bird are terrified of me–though I have done nothing to harm them, and so much to help them.

I know though, it’s not actually about me.

The birds don’t check to see if I am going to approach them. Even when I am walking straight to the garage, they have flitted away before they can tell where I am going.

They don’t stop to process that, given that I put the bird feeder out and fill it once or twice a day for them to enjoy, it clearly stands to reason that I mean them no harm.

They don’t seem to notice that I often take breaks from working on my computer to gaze as they flutter about, coming and going. I enjoy them.

And yet, they run away from me…wanting nothing to do with me…the very person who is supplying them with top notch seeds.

Their little bird brains have decided I am dangerous, without it actually having anything to do with me.

These birds, and their incredible skittishness towards me, despite the fact that I adore them and am trying to help them remind me of the work I do so very often in therapy with clients, particularly clients with trauma.

People who have had some level of trauma pull away when their brains say: DANGER!! And the cues that say DANGER to a trauma survivor can be unpredictable and surprising. The decision to pull away happens automatically…the part of the brain that makes decisions before a person actually has time to reason it out logically. The alarm response is immediate.

Others of us remember a bad breakup, a difficult friend who put us through the wringer, an older sister who bullied, a mean boss–a bad relationship experience that our bodies are insistent will not be repeated. Most of us don’t get through life with some level of trauma, even if it doesn’t reach the threshold of PTSD. 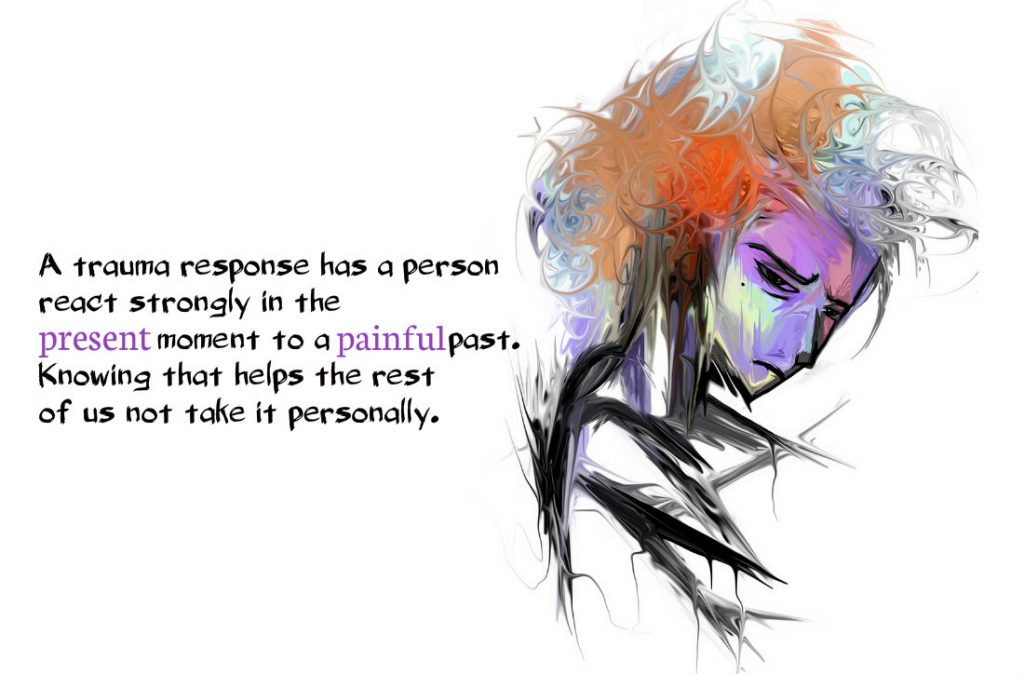 So often in therapy, a couple comes in for therapy, with one partner upset at how the other reacted. It hurts to feel rejected or abandoned in response to something it seems that you said or did.

Because if all you did was the equivalent of opening the back door to the birds, and you knew you weren’t going to be harmful in any way, it’s hard to see a reaction that implies you were threatening or demeaning. It hurts. And you want to challenge the person who acted like you did something that you know you didn’t.

So often, a therapy session has the component of one partner being upset at how the other partner hurt them by pulling away, getting upset, getting angry, or somehow “losing it”.

As you sit hear reading this, can you think of a relationship where someone reacts to you like the birds in my backyard react to me?

It’s so tempting to take it personally, isn’t it?

When you see a reaction that doesn’t fit your efforts to help, it can hurt to feel so misunderstood.

In my experience, the hurt that is felt when witnessing a trauma response often has people go on the offensive.

It would be like me yelling at the birds and throwing rocks at them because I’m angry that they fly away as soon as I open the backyard door.

Trust me…doesn’t work, at all, with birds. Doesn’t work with people, either.

Can I invite you to remember the birds…and their extreme fear of me–despite the fact that I’m not scary? And I ask you to recall it the next time you:

Can you pull back, take a deep breath and say, “That reaction was not about me. The birds fly away from Carolyn, even though she would never harm them.”

That will change how you respond to the strong reaction, in a way that gives everyone space to feel their feelings in the moment, and then figure out what happened later–maybe much later. It will allow you to be kind when the response seems sharp…and so often, that will de-escalate the situation, and allow you to both get on the same page.

I snapped at Husband the other day. He was cleaning a hall closet and had a pile of towels on the table.  And he asked me in a fun and joking way about what he could do with the pile that had previously been stuffed into a too-small space in a disorganized way.

I gruffly told him it was almost noon, and unexpected interruptions had consumed most of my morning, and I was terribly behind and I did not appreciate his question. I was not kind.

He didn’t deserve my harshness, but he got it anyway.

(The guy is cleaning up cupboards, and I get ticked at him? I mean, seriously!)

He didn’t bite. Or lash back. He didn’t tell me how out of line I was. He didn’t correct, scold, get mad, or anything else. He didn’t push in a way that I would have pushed back harder.

He knew it wasn’t about him.

He just said, “OK” and took the towels away.

15 minutes later when he came by, I had calmed down. I could apologize. We worked it out.

I’m so grateful he knew is was a “bird reaction” and gave me space to react harshly. He didn’t pretend it was OK (because it wasn’t OK to treat him like that), but he didn’t make it about him in the moment either.

Often, it’s not about you. 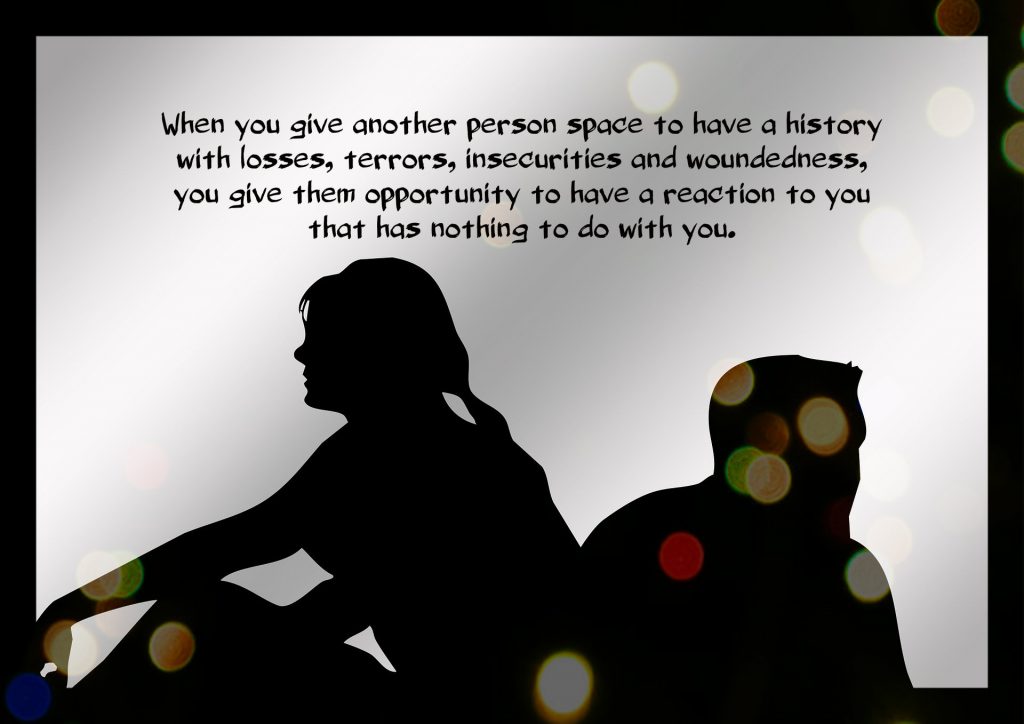 When you can give yourself permission for the other person’s reaction to not imply anything about you, life is easier.

When you can remind yourself that often people respond to something you say out of their own fears that have nothing to do with you, you can be compassionate and understanding.

When you give another person space to have a history with losses, terrors, insecurities and woundedness, you give them opportunity to have a reaction to you that has nothing to do with you.

Holding onto knowing about a “bird reaction” can give you compassion instead of hurt, kind words instead of sharp words, and build understanding and connection rather than relationship rupture.