Dear Male who is frightened by the #MeToo and #TimesUp movement,

It’s not easy to be a powerful male these days, is it? So many powerful men have had successful careers and reputations destroyed in an instant. Let’s talk about it.

The #MeToo movement is huge these days–so many brave women supporting each other as they share their experiences of sexual harassment by prominent men. They speak of the inappropriate use of power, intrusive touching, and sexual assault, including rape. So many men  being fired, losing contracts–high profile men losing great gobs of money because our culture is finally not giving silent assent for dehumanizing behaviour towards women. More than one Canadian politician has resigned.

For too long it was ok to be charming in public, and abusive in private.

Turns out that, actually, what a man does when he believes no one is looking does matter!

Finally, it is not a good time to be a man with a history of taking advantage of his power to mistreat a woman.

And larger systems are now being held to account as well. Organizations are being forced to acknowledging that assaultive behavior by an individual that is allowed to continue can only happen when people in power look the other way and allow it to happen.

So now, the concern is being raised…is it safe to be a man in the presence of a woman? Who is next? Now that women are being believed when they are courageous enough to come forward, a person could wonder: “What if a woman has a beef with a man? Might she could come forward with a false accusation?”  Men are frightened.

An interesting question, isn’t it? A real one, to be sure…but plenty ironic.

Women live with danger all the time and have always done so. It shapes how we dress, where we walk, how we respond. Every day. Somewhere between 20-60% of women have been harassed at work. Yet until recently, most didn’t report it. For too many, the workplace became first unsafe with the violation. And then, when it wasn’t safe to report, the situation became another level of dangerous. Women felt they had no choice but to put up with the innuendo, the suggestions, the coercion, the unwanted contact, and even sexual assault, knowing there was no recourse.

Fear that no one would believe them, that it would affect their ability to be promoted, their pay, or even whether they would remain employed. Fear women would be blackballed, their career would plateau–or worse. Women feared blame–that they somehow invited those unwanted comments, or they don’t have a sense of humour for the innuendo: “I was just joking…can’t you take a joke?”

Until recently, there was little way for reporting harassment to go well.

Men, the fear that is involved in sexual harassment hasn’t just begun. It’s been there for a looooooong time. The fear has now shifted from women to men.

Men now have to rethink their actions. Men all over are asking themselves:

Conexus Counselling is my baby.  I own it. It grew from me being on my own to now having about a dozen people on the team. I like to say, “our team”, rather than my team. We work well together, with a style of collaboration.  If you ask anybody around the office, they’ll tell you that we all know that Melanie, our office manager, is the real boss.  She knows what’s going on, all the time, and she and Del run a tight ship. Melanie organizes us super well.

It  becomes my choice whether I use that power to empower or exploit others.

I believe, to my very core, in servant leadership. I believe that you can get the best out of good people when they feel safe. I believe Simon Sinek’s line: Real leaders eat last. 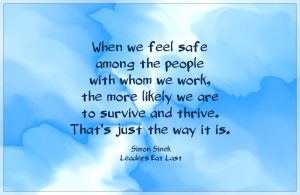 I’m a woman, but I have power. Sometimes, more than I want. People tell me I am intimidating sometimes, and I, frankly, chuckle.  They don’t. I’ve learned that although I might not feel the power, the people whose cheques I sign do feel it. And I have to respect that, and develop an empathic approach to deal with it. It’s taken me a while to accommodate for the power I have.

I have learned I need to be the person to name that power, to explain my intentions for safety, and to be authentically convincing that I don’t intend to abuse it. I have to intentionally build trust that I want people to express their concerns to me, and I want them to tell me if they think I don’t handle their vulnerability with tenderness. As the person with the power, it’s on me to own it and then make the staff feel safe with how I use it/disperse it.

When a colleague at work (i.e. someone who works for me) and I have a discussion and they ask me about how to handle a situation, we talk about it.  We discuss it, and together look at the angles of the problem. Sometimes, they ask me how I would like them to respond as a therapist at Conexus.  As the director, the final responsibility stops with me. Sometimes, we brainstorm a situation together, as we discuss practical implications along with our ethical and moral principles. Other times, I let them know how we have dealt with similar situations in the past, and why I might suggest a plan of action given how we operate.  Sometimes, the discussions get deeply personal, for example, a staff person lets me know why a situation is particularly upsetting to them. Oftentimes, the fact that we might have different backgrounds or experiences has us see the same situation differently…and so our conversation can be tender and awkward.

I’ve taken to checking in at the end of a conversation with one of the therapists who works for me:

I’m not perfect, and I’m sure my staff could give you a laundry list of what I could be doing better…but part of my profession obligation as a therapist is to be sensitive to power differences. As a mental health clinician, it is my responsbility to be aware of  the effect that power (gender, ethnicity, role, etc.) has on relationships.  Power impacts conversation. It impacts the way those with less power engage in those with more power. I wish that as a therapist I didn’t have power over my clients, but it doesn’t matter whether I like it or it…I need to acknowledge its impact as part of being professionally competent.  When it is is acknowledged, then it can be responsibly managed.

It takes time to wrap up these conversations well. I’m so not perfect about it. Sometimes, follow up conversations are required which take circling back to the issue. It’s messy and challenging and time consuming.

But I’m committed to investing in the time, challenge and messiness of making sure that my power doesn’t intimidate or pressure anyone into a situation that isn’t comfortable for them.

I am on a committee with about 6 guys and myself.  I’m the only woman on the team.

I’ve been on other teams before where women are “less than”, not respected, or not as heard. Trust me, it sucks to present an idea that I know is good, and it gets glossed over…and I know, from past experience, that if I feed that idea to a male so he can present it at the next meeting, it will get jumped on.

But on this team, it’s different. It’s great. In most ways, it doesn’t even feel like I’m “the only woman”…mostly it just feels like 7 people working together. Gender doesn’t matter…I am one more person on the team. Except sometimes, when they respectfully look to me out of an acknowledgement that I, exclusively, have a female voice on this team. Sometimes, they wonder how a woman hears something. Although I can’t pretend to speak for all women, I think it’s honest of the men to check with me as the one female voice about how other women might think on a topic.

A few meetings back, one fellow was leading the discussion. He was having us brainstorm ideas, and was writing our ideas with a marker on some sheets of paper on the wall for us all to see.  After he had done it for about 45 minutes, he suggested that we continue tossing out ideas on various topics with someone else being the scribe.

He asked who wanted to take over writing ideas on the papers on the wall. No one immediately volunteered.

So, I stood up and said I would take over the writing. I made a lighthearted comment by saying something like: “As the token woman, it’s probably only right that I be secretary.”

I’ll never forget what happened next.

He didn’t laugh. The others took his lead and didn’t laugh either. He just looked at me, maybe a little confused, maybe a little sad. It wasn’t unkind, though. It was awkward for a moment or two, and then we continued on with the productive meeting we were having.

He didn’t let me get away with a comment where I degraded myself. He didn’t laugh at a comment where a woman was minimized…even when a woman herself made it.  My joke (which, in hindsight, wasn’t at all funny) wasn’t enjoyed. He didn’t find it funny to reduce my role. My own internal, unconscious misogny wasn’t allowed to be enjoyed or celebrated.

My respect for that man grew three sizes that day.

Justin Baldoni does just that:

Dear Man who now worries about how safe it is to be with a woman at work,

The men who need the message of this article the most, ironically, are the ones who are more likely to cynically dismiss it as an “over reaction” by a woman, or a “rant” by a bra-burning feminist. Check your initial reaction…and look underneath it for a more vulnerable response. 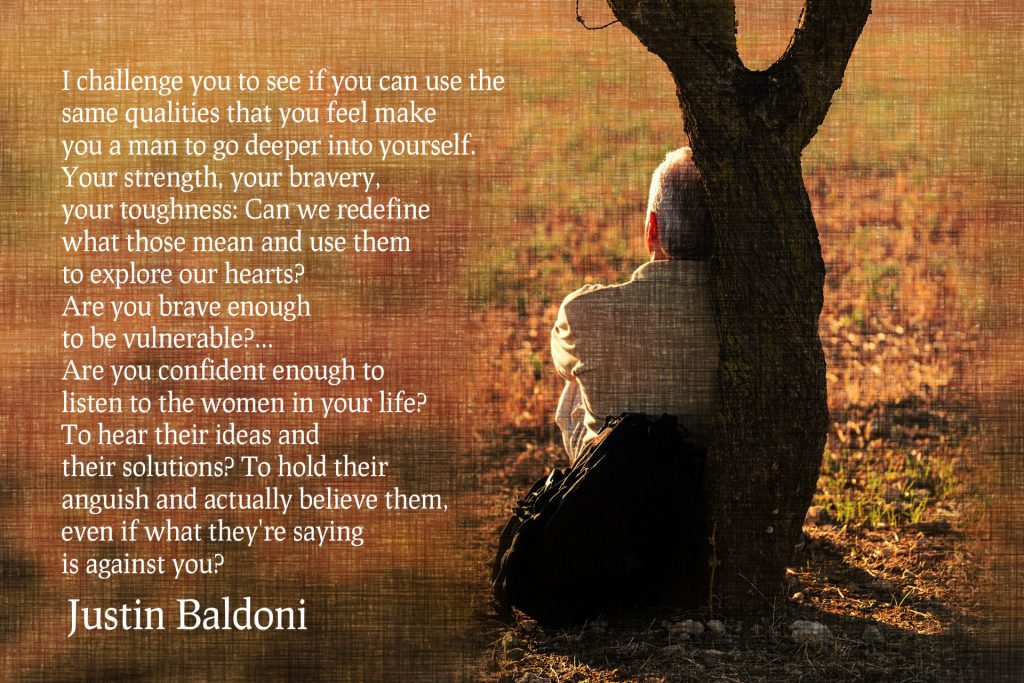 Might I be so bold as to suggest that more cynical you are of what I write, and the more inclined you are to be angry at my words, the more relevant this is to you? It is those who are unaware of how the power they have and they way they abuse it that are the most dangerous.

It takes times and attention, and yes, courage, to face the personal and cultural issues that got us all into the situation where the #MeToo movement became necessary.

Male at work…are you willing to do the work?

This is Part 1. Coming up: A very practical list of things men can do to increase safety for women at the workplace.  Hint: the safer it is for women, the safer it will also be for you too!

Part 2: How do we, as a culture, relate to men behaving badly.