If you enjoy this blog, you may enjoy the book I wrote that covers topics like this one:

Husband and I love each other, but we don’t always see eye to eye. We have to sort out disagreement and differences of opinion and perceived and actual slights just like anybody else. I don’t like it when Husband and I are at odds with each other.

My world isn’t quite right when Husband and I aren’t right.

And when he and I are solid, I go through my day in a more solid way. I like it when I know he and I are on the same page, when I feel like he’s got my back and we’re good.

But…here’s the thing: I believe in hashing it out. I don’t like ignoring the underlying tension hoping the trouble will disappear on its own.

I don’t like a fragile ceasefire existence where we are ignoring an issue to look like we’re OK. I’ve worked with enough couples to know that pretending something isn’t there, doesn’t actually make it not there.  The instability and uncertainty of ignored stuff will show up sinisterly in different ways in our relationship as we go about our lives, and I don’t like those subtle effects.

I want a relationship where we’re actually good with each other, which means taking care of the crap as it comes up, to make us stronger.  It means welcoming the tension of a conflict as a deliberate lifestyle.

I don’t like conflict with Husband, but I do find it less worse than not dealing with the conflict.

Husband and I, formally and informally, have developed some guidelines around our conflict. We’ve worked at this, explicitly and implicitly over time to develop a style of conflict that is authentic about the tension and the upset, but something that doesn’t create all sorts of damage that needs to be healed later.

One of the big dangers of working out a conflict is to incur further damage during the conflict itself.

Just like a bell can’t be unrung, some things said in the heat of the moment can be unsaid, and can’t be unheard.

I work with couples frequently who come in not only deal with a major issue, but the additional fallout of the fights that have arisen during the processing of the issue.

Collateral damage of bad behaviour during an argument stings, even when everyone calms down, and there is huge regret for the actions.  Threatening divorce or calling a partner names is something people often regret after (if they can even remember that they did it while they were all fired up!)…but sticks in a partner’s head and creates distance.  That distance shows up on the couch when you’re watching TV later. Small irritations that wouldn’t usually matter start to matter.

I hate messing up when I’m dysregulated and upset.  I know that when I’m mad at Husband, and/or when I’m feeling like he’s mad at me, I am not nearly at my best. I dislike knowing I’ve acted outside of my values in the heat of the moment. Because of that, we have some ground rules that minimize the damage that occurs during the argument. 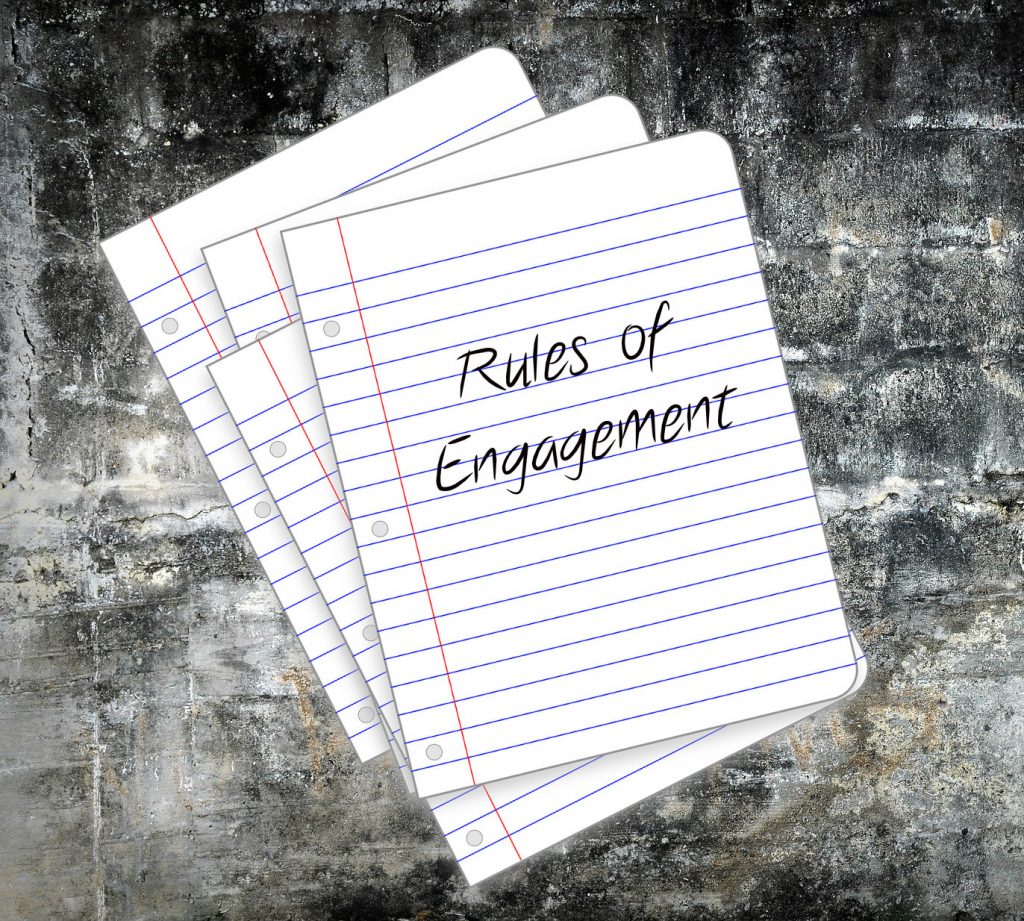 We all have lines that we don’t cross in arguments. Some folks say, “I’m not in control of what happens when I’m upset, so don’t hold it against me.” Think about how often you have pulled a knife on your spouse, slugged your partner, or not done any number of outrageous and illegal things.  Of course you don’t cross some lines. Of course you have some ground rules that you don’t break.  I think the challenge is for us to be deliberate and conscious about the lines we do not cross…because while calling your partner a “#*&%@^” may not be illegal, the heart wounding can be almost impossible to come back from.

The lines that will not be crossed need to be clearly established at a time of calm, when you are fully connected to your best self, and are clear on your values. And it’s not enough to decide not to cross them. Unless there are healthy alternatives in place that are known and understood, it’s not realistic to expect those decisions will actually be honoured in the heat of the moment.

I asked Husband what he thought our rules of engagement are, to see if our understandings matched.

Underneath it all, simply is this: I trust that Husband is for my good, not my harm.  When he says or does something that feels hurtful, I work to remember the big picture. And he words to trust that I ultimately have his back, and I am for his good.

The big picture is this:

We love each other.

We will have our moments of selfishness, self-preservation, and downright goofs…but the core is: we are a team. We picked this relationship and are invested in making it work. The small acts of caring, consideration and love throughout the week reinforce this. We work, imperfectly to be sure, to have love permanence. I want to remember that even when I’m furious with Husband (and I have been!), ultimately he loves me.

I work hard to remember that he doesn’t have it as a core goal to be a jerk to me. On occasion, that becomes a mantra in my head, “Husband is fundamentally not a jerk“, over and over, to temper my reaction.  That sounds perfectly obvious now to me as I write this. However, there are moments of anger where it needs to be a deliberate choice to repeat and believe this line. My mind, when I’m threatened, can become almost convinced that he is deliberately being a jerk to me. My brain plays tricks on me when I’m mad.  Yours, too, right?

Often, figuring out how to help a couple hold onto, “We are ultimately for each other’s good, not harm,” is the key to  successful therapy with that couple. 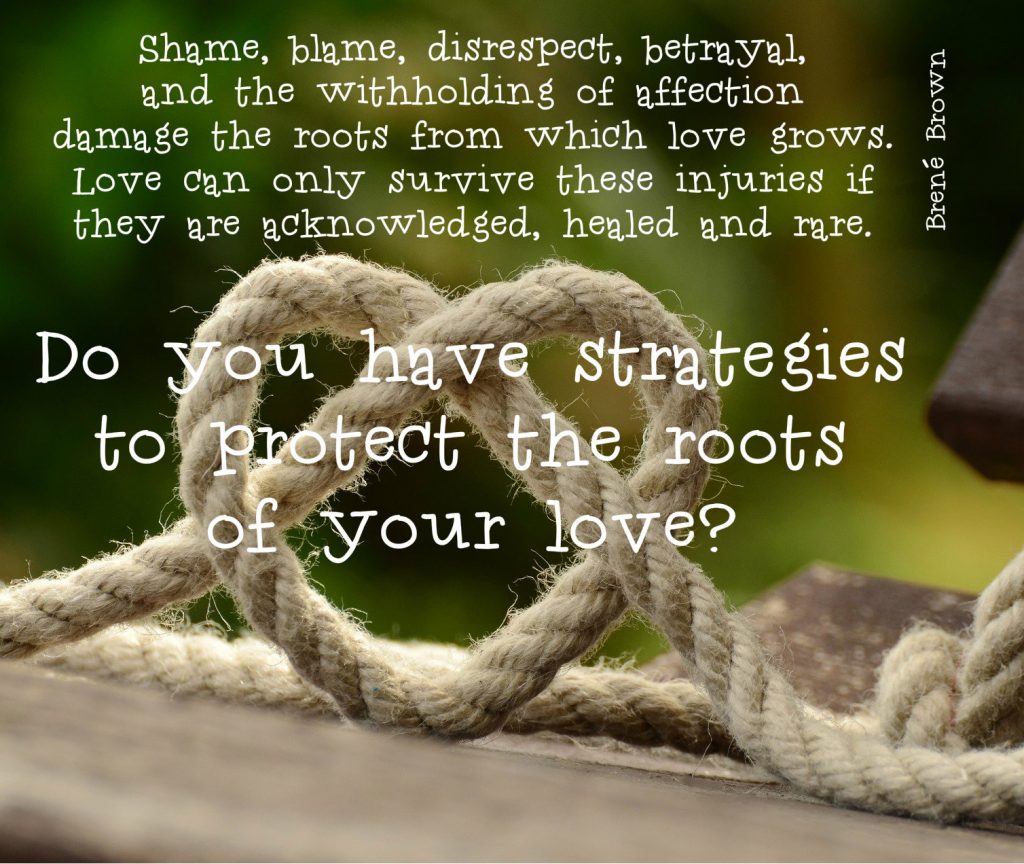 There is one more fundamental agreement we’ve made in our relationship:

If either one of us says we need to go see a marriage therapist, the other one is obliged to be cooperative with the process. No exceptions.

Statistically, it is more likely that Husband will pull the trigger on seeing a therapist.

Here’s the deal:  I work with words and conversations and relationship dynamics for a living.  I know my way around a marital conflict like nobody’s business. It’s my job. We have discussed the possibility that without my realizing it, I could talk him out of his feelings or work my way out of a situation in a way that is not cool. This disadvantage he has because I am a professional relationship expert means that our relationship could become unfair for him and I might not even be aware. He might not even really understand what is happening–he’d just know that it wasn’t good. I so wouldn’t want that.

I want Husband to love our relationship, and hope that if I am doing something destructive without being aware of it, that he will call me on it, on his own, or with the help of a therapist.

If either one of us feel:

then we will both go to a therapist together.  Even if we:

We will go because our relationship will be more important than our desire to not go to a therapist.

Do you have rules of engagement to fall back onto and rely on? Have you structured your relationship for circumstances when you’re upset and might have trouble being your best selves? What rule(s) of engagement have you found to be helpful over the years?

Leave us a comment so we are all richer for it!