He doesn’t often choose to bring her up in conversations.  Most times, when I tuck him into bed (when as a middle school boy he let’s me!), I’ll ask him the question: Besides all the time, when did you especially miss your mom lately?

How is an adolescent boy allowed to miss his mother?

Grieving is vulnerable and middle school can be a place that eats vulnerability for breakfast.

Grieving means going to tender places when men are raised in a video-game, take-no-prisoners, shoot-em-up-world that implies being tender is being weak.

Grieving means crying sometimes and tears are confusing for men in a culture that says, “Real men don’t cry“.

One of the ways my Junior Tribe Member has chosen to remember his mom in this season is with a bright pink headband and fluorescent pink athletic shoes.

He wears them for practices and games. When we went to get him runners for his team, he tried several on, and picked the pink ones.  I asked him if he was sure.

We live in a world where pink runners on a boy can be mocked, I said.

I admired him for this.  Big time.

Sometimes a gangly boy with height he isn’t used to, is the one teaches me how to stand tall.

I love that boy. 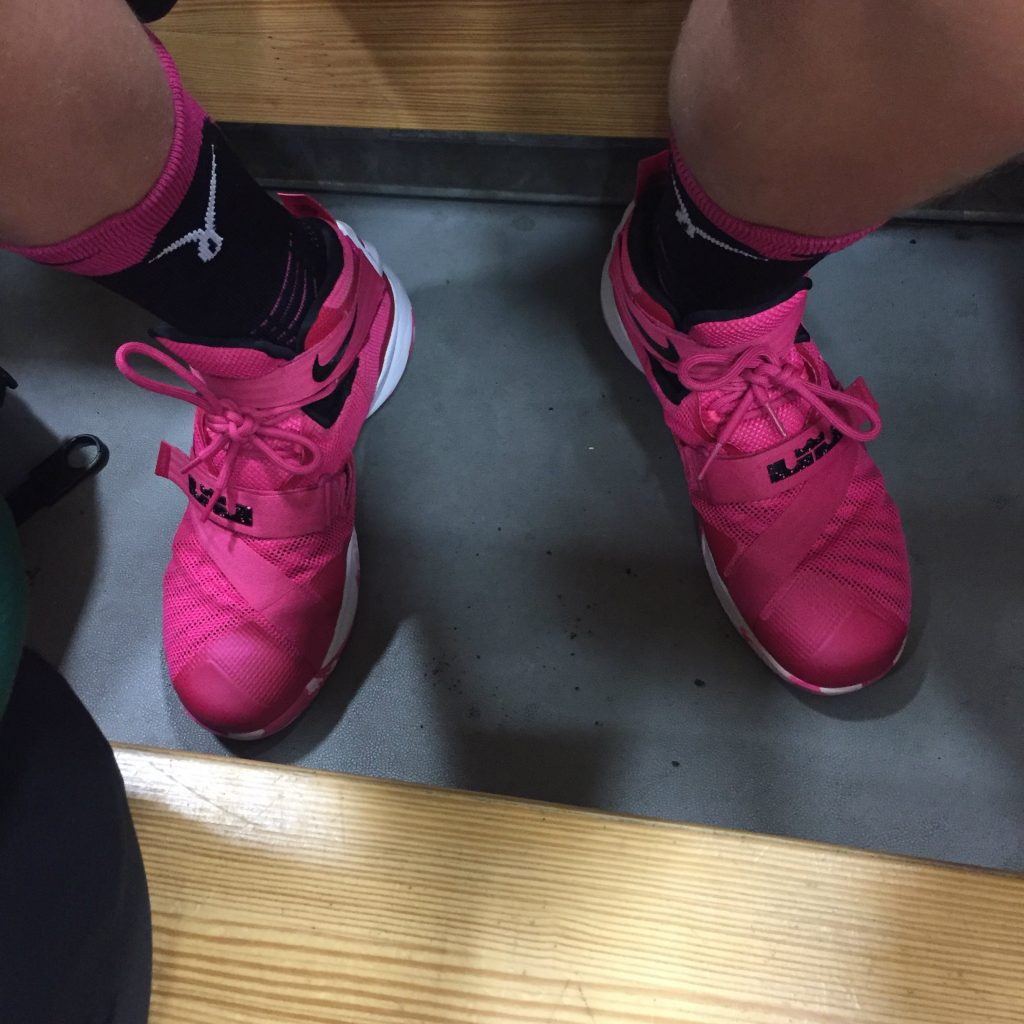 Early in the season, the coach told him that bright pink athletic shoes weren’t OK…and asked him to take a thick, black sharpie to them to color them black.

My boy looked him in the eye and courageously said he would not change the color of his shoes because these were chosen this way to honour his mother.

The coach might not have understood. But he did.  Immediately.

At the volleyball net, it is an unofficial part of the game to chirp some at the opposing team at the net to throw them off their game.  Boys from other teams chirp at my JTM about his shoes, not knowing why his runners are pink.

He doesn’t care. Their beaking is irrelevant. He wears them with pride.

I respect him and admire him for his strength on his comfort in wearing pink shoes.

Imagine what it is like to be the caring friend of an adolescent boy who misses his mother.

What do you say when you want to let your friend know that you miss her too? When you recognize the privilege of having your own mom around, and he doesn’t have his?

It’s hard to have words on that tender, vulnerable stuff when you’re at the beginning of adolescence. To care, but not be quite sure how to say it.

Don’t we all struggle sometimes having a feeling inside that is soft and caring and tender, feeling like there is no way to let that feeling out?

His friend is M.  M’s mom texted me a couple of weeks ago, asking me about an idea M had. I loved it and thought he would too, so I encouraged them to follow through.

When you are 13, you need a parent’s help to order the pink shoelaces online. When your locker is next to your friend, you have to spend 3 days sneaking these pink shoelaces into your teammates’ hands at school to not spoil the surprise. M spent days plotting and planning the fun surprise. The rest of the boys joined in the caring by keeping the plan private and lacing up their shoes.

The team had their final tournament of the season yesterday. Shortly before their game, in an understated way, they got their gear outta their bags and all laced up.

No one said anything. Just got ready for the game.

When they came back into the gym, I had my phone ready to take pictures.  It was only after he saw me taking pictures of everyone’s shoes that my JTM realized what they had done for him.

He didn’t say anything, as is the way of young adolescent boys in public when something very thoughtful just happened. 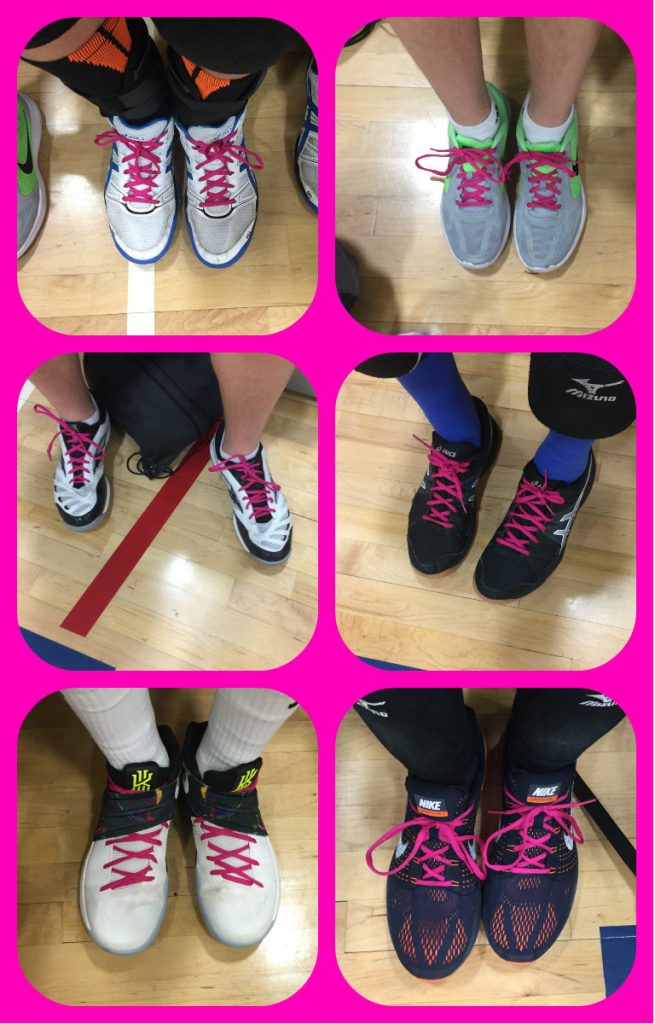 It was beautiful to see these young men support their fellow team member. In a way that was accessible and available to him, they showed him love as they remembered his mom together with him all day in their shoes with pink laces.  Coaches included:

In a world where sometimes we don’t know what to say…sometimes we just need to do something.

Oftentimes, my clients and I reflect on the fact that the love for their child/spouse/friend is there inside of them…but the problem lies in the fact that the other person simply doesn’t know about what already exists.  Hidden inside the person.

The love is there, inside, in the heart. The love just doesn’t know how to come out.

M found a way through.  He helped his buddies figure out a way to show the love and care that is inside of them.  These are teammates who care about each other…and our culture has given them little language to know how to speak that caring.

So, they let their feet do the talking.

Their shoelaces said, “We love you. We know you miss her.  We honour her with you. She mattered to you.  You matter to us.” 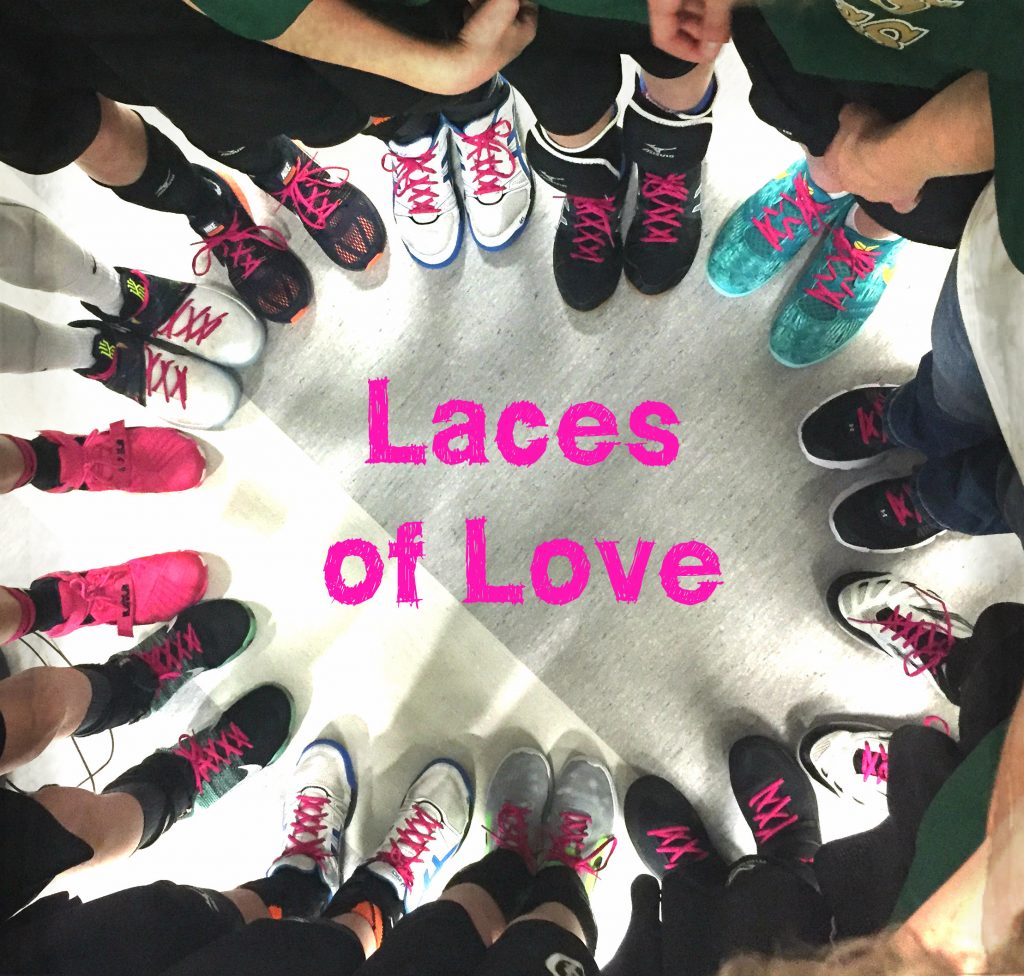 They won the tournament yesterday. It was great volleyball, and very exciting to watch.

But I’m guessing that 10 or 20 years from now, the boys that day won’t remember the outcome of the tournament.

But I’m quite certain they will remember love expressed through pink shoelaces.